The 77-year-old peer and ex-leader of the Ulster Unionist Party was one of the key architects of the Good Friday/Belfast Agreement that ended decades of conflict in the region.

His death comes amid another political crisis in Stormont, with the DUP blocking the creation of a power-sharing administration in protest at the Northern Ireland Brexit Protocol.

A scheduled recall sitting of the troubled Assembly today (Tuesday July 26), which would have expected heated exchanges over the current impasse, has been postponed as a mark of respect.

Lord Trimble’s funeral will take place in Lisburn on Monday, the UUP has confirmed. The service will be held at Harmony Hill Presbyterian Church at 12:30 p.m.

In a statement, Mr Clinton said: “Hillary and I are deeply saddened by the passing of Lord David Trimble, a courageous, visionary and principled leader whose life of service helped bring peace to Northern Ireland.

“Time and time again during the negotiations that led to the Good Friday Agreement, he made difficult rather than politically expedient choices because he believed that future generations deserved to grow up free from violence and of hatred.

“His faith in the democratic process enabled him to stand up to strong opposition in his own community, to persuade them of the merits of compromise and to share power with his former adversaries.

“His legacy will live on in all who live a better life because of him today.

“Hillary and I send our thoughts and prayers to his wife, Daphne, to all of his family and to everyone who loved him and was inspired by his service.” 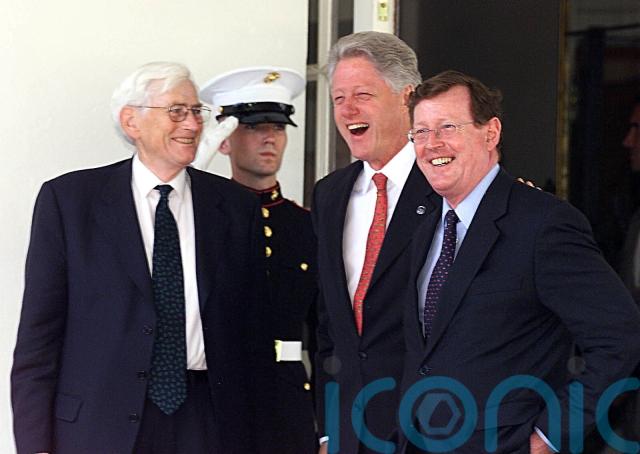 Sir Jeffrey left the Ulster Unionist Party in 2003 and defected to the DUP after disagreeing with his then party leader over the Good Friday Agreement and the dismantling of the IRA.

But he told the BBC’s Good Morning Ulster: “There is no doubt that David was a titan of trade unionism.

“He was someone who believed passionately in the union and I have to say that despite our differences in recent years when I was in the Ulster Unionist Party, he was someone I got on very well with. “

“He was a giant of British and international politics and will long be remembered for his intelligence, personal bravery and fierce determination to change politics for the better,” he said.

Taoiseach Micheál Martin credited his “central contribution” to efforts to secure peace and reconciliation on the island of Ireland.

“All of us in politics at the time witnessed his crucial and courageous role in the negotiations leading up to the Good Friday Agreement and his leadership in building his party and community support for the agreement” , did he declare.

Sir Tony said his contribution was “huge, unforgettable and frankly irreplaceable” while Mr Ahern described him as a “brave” leader.

Former Sinn Fein chairman Gerry Adams, a once bitter political opponent of the Unionist leader, thanked him for helping push through the Good Friday Agreement in 1998.

“He chose to seize the opportunity for peace when it presented itself and sought to end the decades of violence that have ravaged his beloved Northern Ireland,” he said.

Announcing the postponement of the recalled sitting last night, outgoing Stormont chairman Alex Maskey said he would make arrangements for MPs to formally offer their condolences and pay their respects.

“I will announce more details when the arrangements have been confirmed,” he added.

Hunter Biden with the US President’s vacation in South Carolina

Former US President Barack Obama honors Bill Russell with a touching tribute: “As great as Bill Russell is, his legacy rises so much higher, both as a player and as a person.”