Harre Union at the University of Valparaiso is located just north of the iconic Chapel of the Resurrection. The establishment is named after former president Alan Harre, who passed away this week. 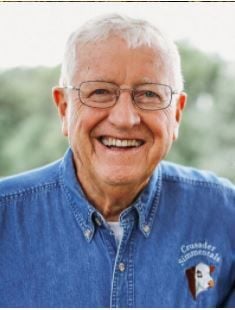 Alan F. Harre was a former president of the University of Valparaiso.

VALPARAISO – A former University of Valparaiso president and community leader has passed away, leaving behind a legacy that will be remembered for transforming the campus.

News of the death of President Emeritus Alan F. Harre, Ph.D., reached the community of Valparaiso on Friday, VU President Mark Heckler said in a statement.

“The unwavering and staunch dedication of the President Emeritus to Valpo has exemplified the character and spirit of the University in everything he has done,” said Heckler. “He has been a model of leadership and service throughout his life and will be deeply missed by the Valpo community.”

Harre was the 17th president of the University of Valparaiso, in office from October 1988 until his retirement in June 2008. He was named one of VU’s 150 most influential people as part of the celebration of its 150th anniversary in 2009.

When he became president of VU, Harre ushered in an â€œera of advancement,â€ Heckler said. He oversaw three major fundraising campaigns that raised over $ 360 million in donations and commitments to VU. As a result, campus buildings were dedicated under his leadership, including the Center for the Arts, the Christopher Center for Library and Information Resources, the German Kade-Duesenberg House and the Cultural Center and Kallay-Christopher Hall.

In 2004, Harre also launched the â€œOur Valpo, Our Timeâ€ campaign which raised more than $ 236 million, which at the time was the largest amount ever raised by a Lutheran university, Heckler said.

A controversial centerpiece of a president’s legacy